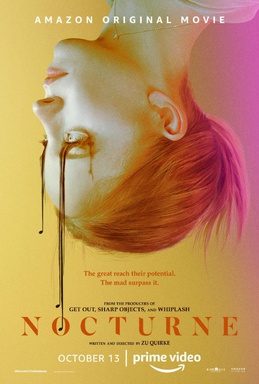 Another one that I didn’t totally hate, but, just like the main character, it had so much wasted potential!

This movie, while beautiful, seemed a bit lacking in a few respects: the actual horror factor, the use of the foreshadowy notebook, and any kind of point. I ended up wondering why I even watched it when it taught me nothing, showed me nothing, didn’t inspire me, and didn’t even scare me.

Another Welcome to Blumhouse entry, this Prime Video special was directed by Zu Quirke and features some really beautiful piano playing, at least.

END_OF_DOCUMENT_TOKEN_TO_BE_REPLACED

Ooh, this one was a let down, but with such a giant franchise, some of the installments are going to flop.

Maybe–just maybe–if this was a standalone movie, and no one in the world had prior knowledge of the Grudge or Ju-On universe, this movie would have scared the snot out of me, but it didn’t. I’ve never seen any of the Grudge movies until now; I avoided them, much like the Ring movies, because I didn’t want to be afraid of the bathroom at night (unfortunately, I am anyway.) Maybe it’s good that I got one of the worst movies out of the way.

The Grudge 3 is directed by Toby Wilkins as opposed to Grudge-movie-originator and director of Grudges 1 and 2, Tamaki Shimuzu (a different writer, too.) It’s one of the only Grudge movies available to stream (found on Prime Video; you can rent or purchase the other two with a Prime account, though), hence why I chose to watch it. It was scary, but it didn’t give me shivers or anything, and, well, I only cared about one character.

END_OF_DOCUMENT_TOKEN_TO_BE_REPLACED

I suppose a night like this would be pretty frightening, but I found it kind of fun (and annoying)!

We’ve all seen them: the solid, classic 80s teen movies, whether they be high school romance, or horror, or whatever Ferris Bueller’s Day Off is. They’re cool! Everyone has high waisted pants! Somehow virgins are always mentioned! What’s up with that?

Well, the original Fright Night, directed by Tom Holland (no, not that one, obviously) and available on Prime Video, is truly an 80s classic. From the huge house of a single mother to the probably-awesome-for-the-time CGI, Fright Night delivers a nice little Halloween escapade into the life of a rightfully terrified teenager with no one on his side.

END_OF_DOCUMENT_TOKEN_TO_BE_REPLACED

What comes at night? I don’t know, but I like it!

With a pandemic still raging (here in the US, anyway), this movie hit a little differently than the first time I watched and barely paid attention to it. A lot of my movie-watching is dictated by Mr. Husband, Nelson, since we watch everything together, and Nelson had seen this movie before me. That meant that he thought it would be best to just skip through to all the “cool” parts for my enjoyment (I did not enjoy that.)

But what I did see, I liked, so I was glad to give this movie a real shot, and watching it flew by almost as if I hardly saw anything at all. It Comes at Night is an artful, chilling take on sickness-related isolation, something akin to the small-group anxiety of zombie movies, but the humans never look like monsters, which makes it all the worse. You can catch this film, directed by Trey Edward Shults, is available on Netflix.

END_OF_DOCUMENT_TOKEN_TO_BE_REPLACED

Mirrors in horror movies are horribly overdone. I like the thrill of it, sometimes; it’s a classic little trope, and mirrors/reflections are pretty prevalent in the world. The title of this film, Behind You, describes the scariness of mirrors just about as blandly as they showcase it. From directors and writers Andrew Mecham and Matthew Whedon, this unseasoned little morsel of mush is available on Hulu.