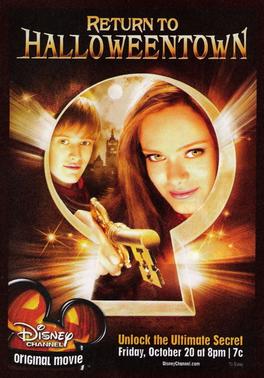 This movie was a vague, boring memory in the back of my mind so horrible that I couldn’t remember anything that happened in this film until after I watched it happen again. Pffffffttttttt BAD! IT’S BAD! Sara Paxton as Marnie is WEIRD and BAD (sorry, Sara Paxton, because it’s really not your fault) and too many old, beloved characters, like Aggie and Sophie, either barely appear or don’t appear at all (as I said before, Emily Roeske started moving away from acting, but maybe the void wouldn’t have been so GREAT if this movie never EXISTED.

Directed by David Jackson and streaming on Disney+. Let’s get to the scathe, then.

I’m–I’m so tired after watching this movie. There were so many things that didn’t make sense that I ended up having to take notes because the plot was just falling out of my brain. Okay. Let’s start with what I liked:

It was about Halloween.

That’s it, folks! This film felt like it wanted to be Harry Potter, but it was Harry Potter caught in a rainstorm and smothered in sewage. We’ve got Judith Hoag, Joey Zimmerman, Lukas Grabeel, and Debbie Reynolds reprising their roles, although Reynolds only gets a couple minutes on screen as Aggie. Marnie is, of course, replaced. There are a few new additions, like Marnie’s RA Aneesa (Summer Bishil), who is a friendly geenie, and Kristy Wu as the evil fellow-student Scarlett, who is helping her father, Silas (Keone Young) and the rest of the Dominion–a group of witches and warlocks who want to enslave all of H-town–to try and get a precious Cromwell amulet that is hidden under campus. Oh, and the ancient, ten-centuries-ago queen of H-town who hid the amulet? That was Splendora “Agatha” Cromwell, and she looks exactly like fake-Marnie. SNORE. To save time, I’ll just make a list of all the ridiculous stuff I found while watching this movie.

And that’s that, folks. I can’t wait for this movie to lurk back into the recesses of my mind. I hope I forget every detail when I wake up in the morning.