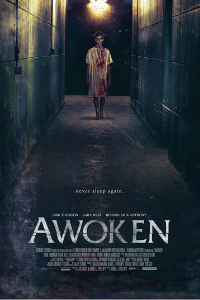 I would have rather slept through this one, I think.

I’m not even sure this movie deserves a synopsis. It’s one of the most basic premises I’ve seen, filled with overused tropes and darkened to the point that it is almost impossible to see anything. Awoken, directed by Daniel J. Phillips and available on Hulu, doesn’t leave any room for imagination and, yet, is the most bland thing I’ve seen in a while.

So. The film opens with what seemed for most of the movie like a totally unnecessary piece of violence, but turned out to just be a very unclear and misplaced prologue: a young boy cries as an older man stands from his bed and buttons his pants. The man yells at the boy to stop crying, but then is distracted by another boy screaming down the hall of the apparent all-boys foster home. He drags the first boy down the hall to confront the screamer, and the screamer–possessed–attacks the man. The camera shows the door outside the room as a scream echoes through the hall. End scene.

Then, we head straight to a college classroom, where medical student Karla (Sara West) learns about sleep disorders next to her friend, Alice (Amelia Davis). The professor, Dr. Robert Atwood (Erik Thompson), appears later on to propose to a desperate Karla a solution to save her brother, Blake (Benson Jack Anthony), as he deals with progressing Fatal Familial Insomnia. Basically, he can’t sleep for so long, he’ll die.

First, I want to say that I totally thought the boy form the beginning was Blake until, like, the end of the movie. Blake and Karla’s parents are dead; I figured the younger brother of a college student could have been in foster care, and, honestly, the actors were similar enough in the ultra-dim lighting for me to not notice a difference (I’m also notoriously bad at paying attention to the beginning of movies. Oops.)

Turns out, the boy was actually Robert, and he credits the evil demon who killed his abuser as his savior. Robert tricks Karla, Blake, Alice, and Karla’s ex, Patrick (Matt Crook), just like Robert tricked Karla and Blake’s parents years ago. In trying to free this demon and gain its trust, Robert sacrifices Karla and Blake’s mother, who also had FFI, but he fails. He fails again, by the way, because, OF COURSE, the demon dOeSn’T wAnT tO bE cOnTrOlLeD and makes Robert impale himself on a weird spike in the basement.

I really didn’t like this movie. It gets an extra star because: 1) I did watched the whole thing, but was always hoping for more, 2) the use of old tapes of Robert’s first attempt were a cool idea that could have been used so much better, and 3) a scene where possessed-Blake crawls backward in bridge pose made me laugh.

But, really. The whole medical-conditions-are-scary thing is unkind and overused. Dusty hospital (basements) with sharp lights and otherwise total darkness are annoying and stale. The writing isn’t great. The ending is so subpar that I don’t even care to mention it. It’s all BLEH! VERY BLEH!

In the end, I don’t recommend this movie unless you want to do a study on all of the blandest, most boring tropes in the horror genre. It didn’t scare me, or thrill me, or excite me in any way.

Stay scary (and avoid this snoozefest),