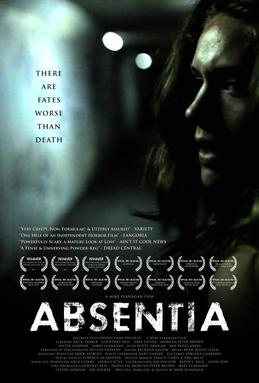 As a disclaimer, I watched this movie two days ago, so some of the details might be absent from my mind. Ha! Ha.

Anyway, the Mike Flannagan (of Haunting of Hill House pride), crowd-sourced, indie film had high expectations way back when it was first being conceived. The movie, available on Amazon Prime, had some pretty good reviews. I was a little desperate when finding horror movies I hadn’t seen or weren’t willing to watch again, so this movie was one of the last I chose out of the sacred 31.

What pulled me in was the description on Prime Video, where a missing-person’s case turns out to be supernatural. I was hopeful, and, honestly, pretty let down.

I have to say, the movie started out–mmm, somewhat promising, I guess. There’s a mysterious missing person, Daniel (Morgan Peter), and his wife, Tricia (Courtney Bell), replaces his ragged missing persons posters with fresh ones just as her younger sister, a recovering addict–important to the story line–named Callie (Katie Parker) moves in to stay for a while. Oh, and Tricia is pregnant by the detective who has been working her husband’s case for the last few years, Ryan (Dave Levine).

Daniel went missing mysteriously seven years prior to the movie, and Tricia held out hope that he would come home until she, apparently, slept with a cop who she wouldn’t even go out on a date with, which we know because he kind of incessantly pursues her throughout the movie. And Mr. Detective only gets worse from there, aggressively demanding that Tricia lock her doors in such an apparently unsafe neighborhood, and begging her to move in with him, and blaming Callie for all of Tricia’s problems.

Detective Ryan is actually probably the scariest part of the movie. I was looking for some real supernatural thrills, but it takes almost an hour for anything really scary to happen. Sure, Daniel’s apparition appears a few times behind Tricia as she comes to terms with requesting his death certificate–death in absentia, where the movie gets its name–but the jumps are minor and short-lived.

At one point, it really seems like the story might pick up. Tricia takes a daily jog through a nearby tunnel, and, one day, she stumbles upon someone pale and thin sleeping in the tunnel. Understandably, she doesn’t want to be stuck in a dark tunnel alone with a stranger who begins to call after her, “You can see me?” followed by his name and a request to trade with her. This is the real premise of the movie: some silver-fish synonymous monster steals people away to beat the snot out of them in an “underworld,” but it likes to trade. The person in the tunnel hoped to trade with Callie, offering her a pile of little metal trinkets, but she leaves and says she’ll come back with something later.

Well, soon after she delivers tupperware full of leftovers to the empty tunnel, and just as the Rotten Detective is walking Tricia out the door for a date, Daniel appears on the street. MAybe now something will happen?

I don’t want to summarize the entire movie; basically, Daniel describes to Callie the silverfish monster, and it attacks the house, taking him away; everybody thinks Callie is on drunks again and own’t believe her amazing hypothesis (but what could they really do about it, anyway?); the Detective gets stinkier; there’s a sacrifice; a totally-mostly useless side character who mistreats small animals but could have been a lot more important if the movie had more of a point; and then it ends. Yay.

I didn’t pay a lot of attention to this movie, but I really tried to. The premise is cool–I think there’s a TV show out with the same name–but the shaky indie shots just didn’t do justice to the material, and the writing was long-winded, with huge dialogues between the characters that just felt so…hm…uninspired. Give your watchers a little credit; I’m looking at the end scene between the detectives, especially.

Oftentimes, a scary movie will stick with me for a while, even if it’s bad (I’m talking about Bedeviled especially), but this one left little-to-no impression. Maybe it was that the scares with Daniel weren’t too convincing, or that the monster only appears, like, twice. Maybe it was the lack of motivation or clear storyline. Maybe the film just lives by a mantra the same as its name and intends to absent itself from the minds of all viewers.